Alright, let’s get started with the basics. Keep in mind this is not a course on basic kitchen skills, if that’s what you are looking for Brothers Green Eats is a very good resource, so check their beginner’s guide if you have any questions about chopping, how to handle a knife and whatnot. Those are things I can’t explain via text. Don’t worry about being too precise or quick, those things come with time.

Also important before we start: I won’t give you exact measures for spices, that will vary widely from person to person. In our kitchen for example, we are known for salting everything way too much and we’ve been trying to use less but old habits die hard.

Rice: 2:1 water:rice ratio (that means 2 cups of water per cup of rice). If you keep that in mind you will never fail (important: if you’re using a rice cooker go for a 1:1 water:rice ratio, I literally only used one once so I don’t know if it applies to every one of them, but I’ll assume you know how to use it if you have one). As for how you should cook it, throw it in a pan with some salt (this will vary from person to person, learn how much you need, as a rule of thumb it’s better to have too little salt than too much salt), turn on the stove on medium, cover and let it sit there until it absorbs all of the water. Ideally you’d have a see-through lid and be able to see it but if you don’t, open it to check once in a while. Don’t stir the rice. Addendum: Rice is a great way to taste test spices, if you don’t know how something tastes or how it will go together with something else, cook a cup of rice and serve small portions with different spices, it has a very neutral flavor and will let you properly taste the spice.

“The rice:water ratio is not universal. When in doubt, check the instructions on the packet. How much water you need is dependent on the kind of rice you buy. Also, the amount of water you use is not dependent on the method you use to cook it.
I cook my long-grain white rice in a 1.5:1 water:rice ratio in my rice cooker. A 1:1 ratio results in crunchy, under-cooked rice.
Long-grain brown rice definitely would not get cooked enough in a 1:1 ratio. That typically needs a 2.5:1 water:rice ratio.”

Potatoes: There are hundreds of ways to prepare potatoes and it’s very hard to go wrong with any of them. The easiest one is to boil. If you have more patience than I, you will also peel the potatoes. It’s as simple as cutting them in half (or desired size), throwing them in water (make sure the water covers all of the potatoes), bringing it up to a boil and waiting. Poke it with a fork or any type of skewer to check for doneness. If you have an oven you can also cut them in any way you want, cover them in olive oil and throw them in the oven. The cooking time here will vary widely depending on the thickness. I can’t give you anything exact. Important: Potatoes need more salt than other foods and it’s very hard to use too much, keep that in mind and go a little crazy here, chances are you’ll be fine.

Pasta: Get the biggest pan you have. Fill it with water almost to the top. Add about a teaspoon of salt. Bring it up to a boil and throw the pasta in the water, follow the package directions for cooking times and you should be good to go. Don’t forget to stir the pasta a bit, else it will all clump together. Try it for doneness one minute before, what you’re going for is a bit of a bite to it but it should be cooked all the way through. That’s what “aldente” means, “to the teeth”, literally translated. It’s important to drain the pasta immediately, else it will keep cooking in the warm water even if you turn the heat off.

Bread: I love bread and eat sandwiches every day for dinner (I usually eat something warm for lunch, cultural thing) but I don’t have time (or I just don’t want) to knead the dough for so much time and bake bread every couple of days or so, the solution to that is no-knead bread. It’s important that you follow these measurements this time, the total time it will take you of actual work is maybe five minutes, but you’ll have to let it rest and rise for a longer time than usual so plan in advance! * 1/4 tsp dry active yeast * 1 1/2 cups water (325 grams) * 1 3/4 tsp salt * 18 oz by weight all-purpose flour (500 grams), about 4 cups

It’s as simple as mixing everything, letting it rise for 12 hours and baking at 200˚C until somewhat brown.

Quick and easy recipes to get you started:

Pasta Carbonara: Need to cook something in less than 15 minutes? Follow the instructions for the pasta, as it cooks throw some diced bacon in a frying pan on medium heat (no oil required, the bacon already has a lot of fat) until it browns just a little bit, beat an egg (with a lot of ground black pepper, as it should be made) and once the pasta is done, put it in a serving platter (can be the same pan you used to cook it), add the bacon and as you’re moving the pasta, add the egg (slowly). The heat from the pasta should cook the egg enough that you’ll have a creamy mixture. Eat immediately. I personally don’t like reheated pasta so I avoid making more than one serving. And yes you read it right, there’s no cream in pasta carbonara and anyone who says otherwise makes my ancestors cry on their graves.
No-named Potatoes: Peel them, boil them until cooked through, drain them. As they’re cooking, chop up some parsley and rosemary and leave it aside. Once they’re drained throw in some olive oil or butter and stir them around until they’re evenly coated. Serve it and call it a day, it’s a great way to try different herbs too.
Student Omelet: Each person has their own way of making omelets and mine is not the “standard” way. Beat up and season three eggs (more/less depending on hunger), Pick a few veggies out of your fridge (carrots, a small onion, cherry or regular tomatoes, you name it) and chop them. Add some oil to a frying pan and put it on medium heat until the pan is warm. Add the eggs, make sure they’re evenly spread and add your vegetable selection to one half of it. As soon as the eggs have condensed a bit fold it onto itself and flip it every couple of minutes until it’s cooked through.
Breakfast Oatmeal: This will be faster with a microwave but you can also cook it on a stovetop. Go for 1:1,5 oatmeal/liquid (milk or water), I usually make mine 1:1:0,5 oatmeal:water:milk. Throw it in a pan with sugar (optional, I don’t usually add sugar), cinnamon and a chopped or mashed banana. Stir it until the oats have absorbed enough water and have the consistency you’re going for, my microwave takes two 2-minute sections on medium-high heat stirring in between the two. You can add whatever you want to it too. Frozen berries are great, so is honey, I’ve heard peanut butter is also good but I have yet to try it (tomorrow)
Fake Okonomiyaki: It’s fake because you won’t have the real ingredients if you’re on a student budget, if you’re interested in making the real thing check out this website (I literally just googled okonomiyaki and found this out, gotta say I’m a bit scared now, moving on). For the one we’re making, you’ll need an egg, water, flour and soy sauce (not completely necessary). Mix everything until they’re a bit less consistent than a pancake batter (pancake batters are usually 1:1:1 egg:flour:milk which in our case is water), I think a good proportion is about 1:0.75:1. Don’t stress too much about being exact here, this is as free-form as cooking gets. Get a few veggies and meat from your fridge, I usually use potatoes, carrots, cabbage (the one ingredient you technically need on the vegetables side), onions and whatever else I have lying around, grate or chop everything (grate carrots and potatoes, the rest can be chopped) and throw it in the batter until it’s all coated. Put a frying pan on medium heat with a dollop of olive oil or butter (about 1tbsp) and let it warm up. Throw the mixture in and cover. Flip it once it browns or the batter seems almost cooked through, cook the other side for about half the time, serve. The meat should be precooked as it won’t have time to cook in the frying pan. 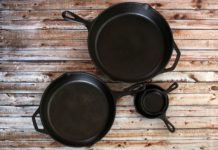 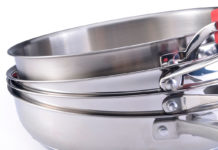 A Beginners Guide to Cookware 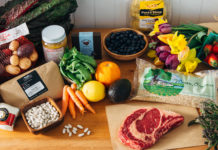 How To Store Your Groceries

For Food Lovers By Food Lovers
Contact us: [email protected]
Made with from San Francisco